Olympia, WA -- Governor Jay Inslee, upon request from the Washington State LGBTQ Commission, signed the 2021 Lesbian, Gay, Bisexual, Transgender, Queer, Two-Spirit, and Intersex Pride Month. This year's proclamation recognizes the work of the Washington Legislature in passing SB5313, the Gender Affirming Treatment Act, sponsored by Sen. Marko Liias (D - Everett), and with the backing and the advocacy of several grassroots organizations working for the wellbeing of the transgender community in the state. The proclamation also recognizes the 30th anniversary of Executive Order 91-06 signed by Governor Booth Gardner in 1991, which recognized sexual orientation as a protected class in the state for the first time.

LGBTQ and ally organizations in Washington are encouraged to use and distribute this proclamation to their constituents. The Washington State LGBTQ Commission has made available a PDF file accessible here.

The text of the Proclamation is follows:

Whereas, Washington State recognizes that one of its greatest strengths is the diversity of its people; and

Whereas, Washington State has a long standing tradition of upholding the dignity of the individual, supporting legal equality and faith treatment for all people, and ensuring that acts of discrimination and hatred will not be tolerated; and

Whereas, members of the lesbian, gay, bisexual, transgender, queer, two-spirit, and intersex communities (LGBTQ) contribute to our state’s success and strengths in a great number of immeasurable ways; and

Whereas, this year we celebrate 30 years since Washington State, through the executive order 91-06 by Governor Booth Gardner, first prohibited discrimination based on sexual orientation in public employment; and

Whereas, this year also marks the 30th anniversary of the first Capital City Pride in our capital city of Olympia, the first such Pride celebration outside of the City of Seattle; and

Whereas, the LGBTQ community continues to be a target of violence, harassment, and discrimination by many and yet continue to thrive through the efforts of the community itself and through the support of LGBTQ-affirming spaces, agencies, and individual allies; and

Whereas, discrimination based on sexual orientation and gender identity is often compounded with discrimination on the basis of race, immigration status, religion, disability, and age, among others; and

Whereas, while nationwide trends continue to highlight the targeting and discriminate against members of the LGBTQ community, Washington State continues to lead in affirming the lives and values of LGBTQ individuals through action such as the passage of Gender Affirming Treatment Act, prohibiting health insurers from denying or limiting coverage for gender-affirming care services on the basis of gender identity or expression; and

Whereas, lesbian, gay, bisexual, transgender, nonbinary, queer, two-spirit, and intersex Washingtonians invite all people to join them during the month of June in celebrating the resiliency of the community in responsible ways and with alternatives to in-person gatherings during the worldwide pandemic;

Now, therefore, I, Jay Inslee, Governor of the state of Washington, do hereby proclaim June 2021 as

in Washington, and I encourage all people in our state to join in celebrating diversity, and promoting inclusion and equal protection under the law, and I further encourage people to join me in eliminating discriminatory policies and practices toward any culture, race, or group. 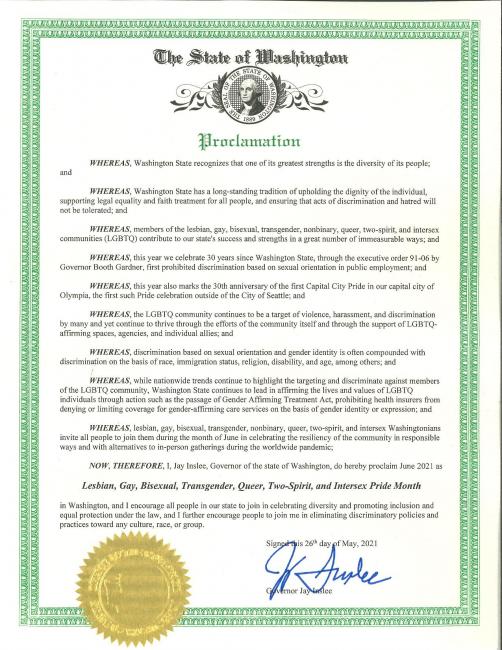