Washington will also make history this year as Governor Inslee joins the Washington State LGBTQ Commission, RAIN, and representatives from all branches of government and community organizations to raise the progress rainbow flag on the Capitol Campus. This progress flag includes stripes and symbols representing Black and other BIPOC communities, the transgender and gender expansive community, as well as the intersex community. The flag raising ceremony will take place on Tuesday, June 21st at 12:15 p.m. on the flag circle between the Temple of Justice and the State Capitol building.

LGBTQ and ally organizations in Washington are encouraged to use and distribute this proclamation to their constituents. The Washington State LGBTQ Commission has made available a PDF file accessible here.

The text of the Proclamation is follows:

Whereas, Washington State recognizes that one of its greatest strengths is the diversity of its people; and

Whereas, Washington State has a long standing tradition of upholding the dignity of the individual, supporting legal equality and fair treatment for all people regardless of sexual orientation or gender identity, and ensuring that acts of discrimination and hatred will not be tolerated; and

Whereas, members of the lesbian, gay, bisexual, transgender, asexual, aromantic, queer, two-spirit, non-binary, and intersex communities (LGBTQ) contribute to our state’s success and strengths in a great number of immeasurable ways; and

Whereas, the LGBTQ community continues to be a target of violence, harassment, and discrimination by many and yet continues to thrive through the support of LGBTQ-affirming spaces, agencies, and individual allies; and

Whereas, the state of Washington has positioned itself as a safe place for LGBTQ people with expanded protections for all; and

Whereas, lesbian, gay, bisexual, transgender, asexual, aromantic, queer, two-spirit, non-binary, and intersex Washingtonians invite all people to join them during the month of June in celebrating the resiliency and contributions of the community with appropriate COVID-precautions and safety during this ongoing pandemic;

Now, therefore, I, Jay Inslee, Governor of the state of Washington, do hereby proclaim June 2022 as

in Washington, and I encourage all people in our state to join in celebrating diversity and promoting inclusion and equal protection under the law, and I further encourage people to join me in eliminating discriminatory policies and practices toward any culture, race, or group. 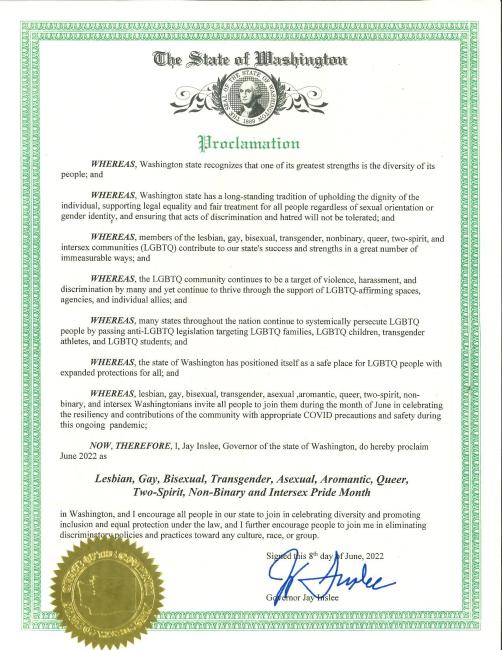